Who Stole The American Dream

Home > Blog > In The Media > Who Stole The American Dream 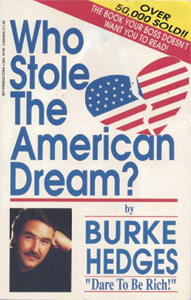 Dan Catto, 36, once had a dream of owning his own small business. He was just 21 years old when he started at the bottom of the corporate ladder in a shoe company with retail outlets throughout Canada. In a few short years, he worked his way up to being the youngest general manager in the history of the company.

Then, the entrepreneurial bug bit him hard, and he left to start his own company. Within three years, his business-like 90 percent of all small business startups – was in bankruptcy. Dan turned back to the security of the corporate world, only to find himself looking for work again when his company was acquired by another, bigger one and his job was phased out. Heavily in debt, his marriage on the rocks, in ill health and stressed out to the edge of an emotional breakdown, Dan hit rock-bottom.

“It’s amazing how open you become when there’s no place else to go but up,” Dan says. “When I was introduced to Network Marketing, I said, ‘Sure – why not? I’ve got nothing more to lose. I’ve already lost everything anyway!”

That was three and a half years ago. Today, Dan’s living in a luxury condominium in downtown Toronto where a valet brings his new Jaguar around whenever he wants . . . and they pick up his laundry, too!

“I could retire today if I wanted,” Dan said. “I already earn more money — and it’s passive, residual income, too — than I’ve ever dreamed of earning!

“Probably more important than the money and the lifestyle,” Dan says, “is the independence and freedom it’s brought me. In any other business, the business ends up owning you. Not in Network Marketing. I can truly say that I own my own life. That’s something very few people from any walk of life can say. And if I can do it – especially from where I started – anyone can do it, too. That’s the beauty of Network Marketing. It’s the greatest system of free enterprise in the world!”